New Additions for the Winter!!! 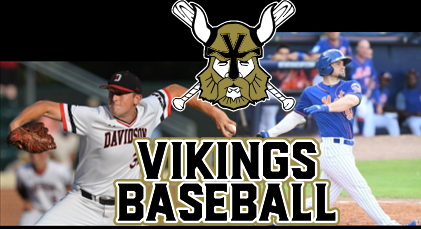 Super exciting news for The Vikings Family! We have 2 new huge additions for the entirety of our Winter Workouts and we are pumped! Evan Roberts and Dario Pizzano will be working closely with all our players for the duration of Winter Workouts!

Evan is a former Viking and a D1 pitcher at Davidson College and is now making a career in Pro Baseball outside of the foul lines. Dario is a former D1 Outfielder at Columbia University and has enjoyed a 10 year career in the Pro’s mashing baseballs!

These two are overflowing with invaluable experience and information for our players and we urge all our guys to talk and ask questions whenever they have the chance! I have provided a small write up on each of them below!

“Having Evan come through the Vikings Program as a player and growing through the game of baseball as a D1 captain at Davidson, to a minor league coach with the Angels Organization is amazing to watch, we are very grateful to be adding Evan Roberts to our staff this winter…he is a top notch person first and foremost with a passion to share his knowledge and expertise with the rest of our coaches and players!!”

-After the completion of the MiLB season, I was flown to the Angels’ Instructional League to assist Pitching Coordinators, Gameplanners and Video Coordinators

-Coordinated and analyzed video, utilized an assortment of new technologies to evaluate players and helped assimilate prospects into the league

-If not for COVID-19, would have had an advanced role in integrating and managing analytic and technological innovations in order to fulfill players’ long-term goals

-For 140 games, served as a conduit between Boston and Pawtucket by coordinating video, inculcating front office developed advanced diagnostics to the players and managers, managing the upkeep of technological products in the clubhouse, producing multiple daily reports and spearheading independent projects

-Walked onto the team, earned a scholarship and helped facilitate the usage of data, tech and the school’s analytically inclined students into the program’s fabric

“Dario was teammate of mine at Malden Catholic but more importantly a close friend and great person on and off the field! From playing in the LLWS to D1 baseball, to Pro Ball and most recently for Team Italy , Dario’s experience and baseball career is one players dream of. The amount of experience and knowledge he holds is impressive by itself but when added with his simple and calm coaching style it truly gets thru to players! We are super excited to have him join the Vikings Staff this winter!”

Dario is a current professional baseball player who has played 10 years for the Seattle Mariners and the New York Mets, as well as most recently Team Italy. Dario is a native of Saugus, Massachusetts, and played in the 2003 Little League World Series.

Dario attended Columbia University where he earned Louisville Slugger Freshman All-American honors. He was a 3-year First Team All-Ivy player and the 2012 Ivy League Player of the Year. He boasted a career .364 BA and slugged a school-record 25 home runs.

Dario was a 15th round draft pick of the Seattle Mariners in 2012. He has played 10 years of professional baseball and has been an extremely productive hitter at every level. Dario was repeatedly voted an All-Star and has played full seasons at every level through AAA. He was even invited to Major League Spring Training with the Mariners in 2016. Dario most recently played for the Fargo-Moorhead Redhawks and the Winnipeg Goldeyes in the American Association for the shortened 60 games COVID season, hitting .290 with a .400 OBP. Dario is a career .280 hitter with 58 home runs and 399 RBI.